This page is dedicated to updates and general information for $I Parse.

Description
$I Parse is a tool for parsing $I (index) files from the Recycle Bin of Windows Vista and later.  There are two modes of operation: directory and file.  Directory mode allows you to point $I Parse to a directory of $I files; file mode parses an individual $I file. Directory mode parses all $I files in the root of the specified directory and outputs the parsed data to a tab separated values file.  If there are files that could not be parsed while in directory mode, they are reported in an error.log file created in the same directory as the tab separated values file. 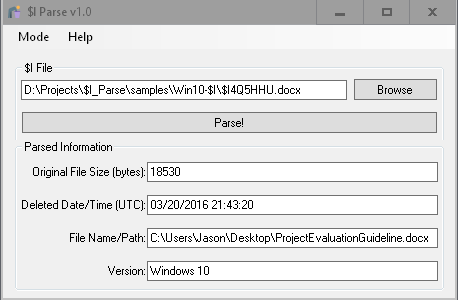